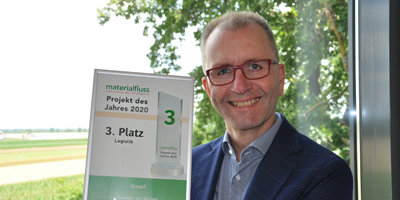 Hubert Borghoff, GROUP7 Vice President and Head of Logistics is pleased with the award

GROUP7’s inventory drone has once again been honoured. After receiving the LogiVisor Award in the past year, the inventory drone now also won the Product of the Year 2020-Award at the “materialfluss WORLD + CONFERENCE”. It ranked third place in the logistics category. “The judgment received by the users is particularly important to us. The fact that our drone landed a place amongst the podium is a highlight for GROUP7 and makes us strive for further innovations”, explains Hubert Borghoff, Vice President and Head of Logistics at GROUP7. The chief editor of materialfluss media format, Martin Schrüfer, held the ceremony. Due to Corona regulations, it took place virtually via webinar.

Combining the drone and Skype procedure from autumn onwards

The inventory drone is mainly used by GROUP7 for collecting data during stocktaking. “Using drones has many advantages. We are a lot more flexible when it comes to the procedure of stocktaking. What is even more important to us is the amount of time saved and the lower costs resulting from that”, Borghoff stated in an interview about the advantages of the drone. The next step has already been planned: “From autumn onwards we will combine two innovative processes. The inventory drone will become a major part of our stocktaking via Skype: for our customers, this means a sped-up process that can be checked from the PC”.